If one were to examine Shia and Sunni narrations with regards to burning as a form of punishment by other than Allah, one would come to the conclusion that ‘Ali ibn Abi Talib (may Allah be pleased with him) had the strongest opinion of all Sahabah with regards to this form of punishment, to the point that he advised and encouraged others to burn transgressors, including sodomites (so called gays).

This is a fact not only proven through famous Sunni narrations (like in Bukhari where ‘Ali is reported to burnt Sabaites i.e. a group of people who ascribed divinity and lordship to him), but through sahih Shia narrations as well, as we have proven in numerous articles on this blog before.

However, despite all these evidences, we still see many Shias living in a complete denial with some either:

What we would like to provide you with in this article is a admission by one of the most renowned Shia Arabic websites in the world called Aqaed.com.

Aqaed.com centre is supervised by none other than ‘Ayatullah’ Al-Sistani, and the irony is that the website does not just uphold the belief and defend that ‘Ali did burn some Ghulat (extremists), it also tries to refute a Sunni hadith by the Prophet which states that nobody punishes by fire except the Lord of fire (i.e. Allah):

Now here a scan (and link>>>) from the Aqaed.com website.

Did Imam ‘Ali (peace be upon him) burn ibn Saba’, may Allah curse him, with fire, as it is mentioned in our books and that the Prophet said, ‘No one may punish using fire other than the Lord of the Fire (Allah)’ which made ibn Saba’ claim divinity for ‘Ali …?

It is not proven that Imam ‘Ali (peace be upon him) burnt Ibn Saba’, he rather expelled him to Al-Mada’in. Yes, there is a narration stating that ‘Ali (peace be upon him) burnt a group of people from amongst the Ghulat for their claim that ‘Ali was divine based on the hadith of the Prophet (may Allah be pleased with him): ‘No one may punish using fire other than the Lord of the Fire (Allah)’. Based on that (i.e. hadith) they used to say that if  ‘Ali wasn’t their Lord (Rabb) why is he punishing them with fire!

In fact, it is the Ahl Al-Sunnah who have a different of opinion on this issue, Al-Shafi’i was in support of it whereas others opposed him (see Al-Fath, vol. 6, p. 103) when he (Imam Al-‘Asqalani in his Al-Fath) said: ‘The Salaf have differed on the issue of burning as a form of punishment. ‘Omar and Ibn ‘Abbas disliked it … others permitted it like ‘Ali, Khalid ibn Al-Walid and others.

We ask the dear readers to pay close attention to what is written now, because the irony in here is amusing but couldn’t be more true.

It is affirmed by Shia authorities themselves that ‘Ali did burn a group of extremists with fire, what they did not mention is that ‘Ali used to burn a good number of different types of people (for various crimes) such as:

So this is an established fact in the most authentic Shia books and Sunni books, yet ironically, whatever Shias quote against the Sahabah are from weak Sunni sources, not even secondary sources! Shias quote from the following books to prove that Khalid ibn Al-Walid and Abu Bakr burnt apostates and others:

None of the above sources nor any other source Shias might add are from primary Sunni sources that are free of defect and unanimously agreed upon (unlike the narration of ‘Ali in the most authentic Shia and Sunni books!), hence even the likes of Aqaed.com centre had to admit that Sunnis differ on the permissibility of punishing with fire. What they did not tell of course is that actually the majority and strongest opinion within the Ahl Al-Sunnah is that punishing with fire is strictly forbidden except as a form of retaliation:

Al-Hafiz Ibn Hajar (may Allah have mercy on him) said:

With regard to the hadith concerning this topic, what appears to be the case is that the prohibition in it indicates that this act is haram.

For the Ahl Al-Sunnah there is no contradiction of course, nor is ‘Ali portrayed in a bad light, this is because the likes of Abu Bakr and ‘Ali had never been infallible to begin with i.e. they were bound to make mistakes, hence we see in Sunni text a respected member of the Bani Hashim (Ibn ‘Abbas) strongly disagreeing with another respected member of the Bani Hashim (‘Ali), this is of course because nobody in the Muslim community ever heard of (let alone believed in myths such as) Imamah and infallibility of certain individuals after the demise of the Prophet (peace and blessings be upon him).

The ultimate irony however is, that even if Sunnis would submit (for the sake of argument) to all the secondary Sunni sources Shias quote (in their desperate attempt to make it look as if Abu Bakr, Khalid and other Sahabah went around burning people for no good reason), it would still not prove their evil agenda i.e. that the Sahabah were evil savages who unjustly punished people with fire (unlike the holy Imam ‘Ali who burnt gays, lesbians, idolaters with love and justice …) as this Shiachatter here claims: 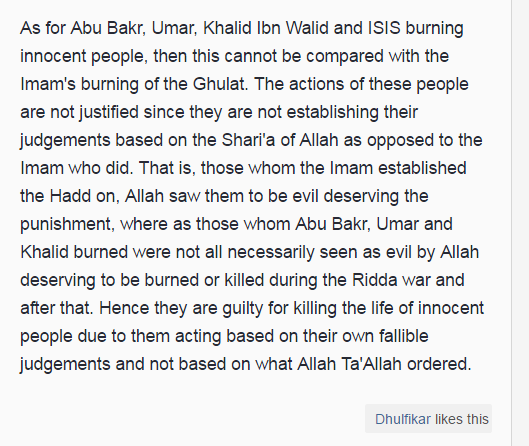 … this is because if anything, it was ‘Ali who advised and encouraged the likes of Abu Bakr and Khalid to burn transgressors in the first place! Yes, if it wasn’t for ‘Ali they probably wouldn’t have burnt anybody to begin with, this is because Shia sahih hadith prove that burning anybody did not even cross the minds of Abu Bakr and Khalid until ‘Ali advised them to do so. So either ‘Ali is  complicit Abu Bakr and Khalid’s mission (killing ‘innocent’ as the Shia claim), or none of them committing a specific crime by burning apostates as this was their Ijtihad:

The burning of the one who indulges in “homosexuality” (lit.: practice of the people of Lut i.e. sodomites).

On the authority of ‘Abdullah Ibn Maymun who reported from Ja’far Al-Sadiq: “Khalid (Ibn Al-Walid) wrote to Abu Bakr: “Peace be upon you. I’ve been informed with clear evidence of a man that has been indulged in sodomy. Abu Bakr consulted the Sahabah who said: “Kill him (i.e. the sodomite).”

He (i.e. Abu Bakr) then consulted the Chiefof The Believers ‘Ali ibn Abi Talib who said: “Burn him (i.e. the sodomite) with fire, for killing alone means nothing to the Arabs (it’s not severe enough).”

A similar hadith can be found in Sunni sources, however, unlike the Shias who have not just authenticated it but included it in Sahih (!) Sirahs of ‘Ali, the Sunni position is that the narration is in fact not authentic, this has been even said by Salafi scholars as can be seen on the famous Islamqa.info website:

Burning was mentioned, quoting those who said that it was proven in reports from the Sahaabah (may Allah be pleased with them), such as Ibn al-Qayyim, who stated definitively that this incident was proven, as was quoted from him in the fatwa.

But there are those who disagreed with Ibn al-Qayyim and regarded the report of this story as da‘eef (weak), such as al-Bayhaqi (may Allah have mercy on him), who said in as-Sunan al-Kubra (17/219): This is mursal. End quote.

It is well known that mursal is one of the types of da‘eef hadiths.

Al-Haafiz Ibn Hajar (may Allah have mercy on him) said:

With regard to burning, Ibn Abi’d-Dunya narrated via al-Bayhaqi and via Ibn al-Munkadir that Khaalid ibn al-Waleed wrote to Abu Bakr, telling him that he had found a man among one of the Arab tribes with whom men would have intercourse as with a woman. Abu Bakr called the Sahaabah together and asked them about that, and the one who had the strictest view was ‘Ali, who said: We think that we should burn him with fire, and the Sahaabah agreed on that.

I say: This is da‘eef jiddan (very weak). If it were saheeh, it would constitute definitive proof.

Shaykh Bakr Abu Zayd commented on this report as follows:

The verdict of the leading scholars is that it is a mursal hadith, as was stated clearly by al-Bayhaqi and ash-Shawkaani.

To sum up, this incident is not soundly or definitively proven.