NOTE: The featured image on this post is in no way an expression of disrespect for the Chief of the Believers, ‘Ali ibn Abi Talib (Allah is well-pleased with him). At shiascans.com we believe that it is in fact incumbent on all Muslims to mock and degrade the fake and hideous “portrayals” (idols) the Twelver Shias spread in the name of Ahl Al-Bayt, whenever there is a chance. No difference should be made with anybody i.e. if there were portrayals of Abu Bakr and ‘Omar they too must be rejected and ridiculed, just as the half-naked “god” with a small sheet around his ‘awrah whom the “Christians” present as mighty Jesus (peace be upon him) must be ridiculed and rejected as what it is, a hideous idol.

It seems that our website is making the rounds, Al-Hamdulillah. On this Shiachat.com thread some Shias are raising questions with regards to “their” first “infallible” and his zeal (may Allah bless Abu Turab’s hand for his Ijtihad) for burning various transgressors with fire. 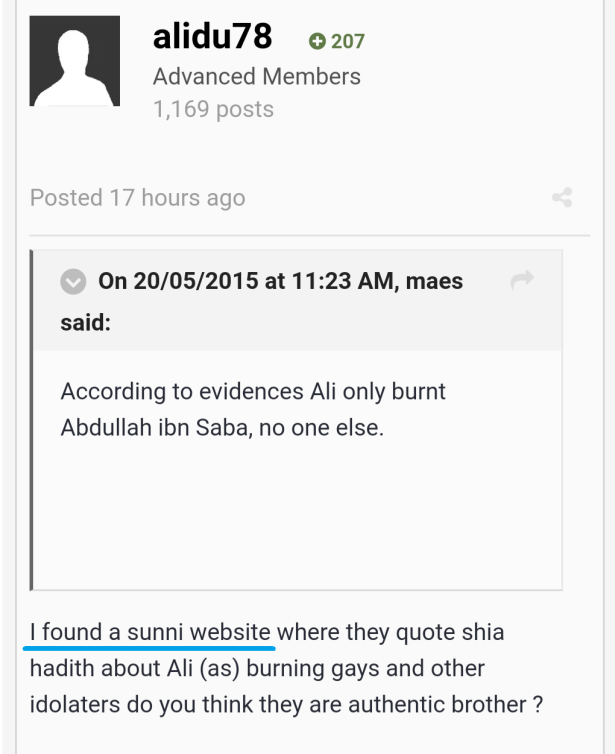 Now the fun bit is that one of the Shiachatters started to run some serious (and utterly failed) damage control (others in their delusion tried to deny the bitter fact altogether …) that can only be described as a textbook example of backfiring.

Basically, in their desperation to water down ‘Ali’s (رضي الله عنه أرضاه) actions of burning (at the very least the Sabaites i.e. Proto-Rafidis, a fact which is proven by Shia Sahih hadiths in the most classical books of Shia Rijal), they claim that ‘Ali didn’t actually burn, he “only” gassed his victims. Yes, gassed! Let us quote from an English dictionary:

in Arabic we have a beautiful proverb:

“He wanted to beautify the eye, but ended up blinding it.”

So the Imam of love and mercy (unlike the “evil” Abu Bakr, Khalid and co.) “only” choked his non-combatant opponents (like the Sabaites) to death according to this silly Shiachatter! Sounds like Hitler, really.  But hey! Shush! Ain’t nobody go and tell ISIS before they learn from the Shia version of  ‘Ali … in Sunni books we have nobody, neither our beloved ‘Ali nor Abu Bakr who choke people to death with gas!

Of course there is not a shred of evidence that ‘Ali killed pagans by gas (as if that makes it somehow better!), we challenge every Shia in the world to prove that through a single authentic narration in their own books, this assumption is baseless. Also the claim that ‘Ali “only” burnt people after beheading (!) them is incorrect, that might have happened in some incidents, however, there are other narrations for instance where ‘Ali buried people alive (!) and burnt them. Sounds like ISIS 2020 …

The calamity here is that Shias sit in a big glass house, unaware of their own books, and whenever they attack the Sahabah (especially since the likes of ISIS have started applying some harsh punishments such as burning etc. of combatants), they ultimately attack their “own” Imam who as a matter of fact had encouraged and advised the likes of Abu Bakr, ‘Omar and Khalid to behead and burn non-combatants such as:

PS: We consider a “gassing” category after this new discovery.