We present you: One of the most embarrassing and most blatant lies attributed to the Imams of Ahl Al-Bayt (and ultimately to Islam) by the Shia sect of exaggerations and superstitions: 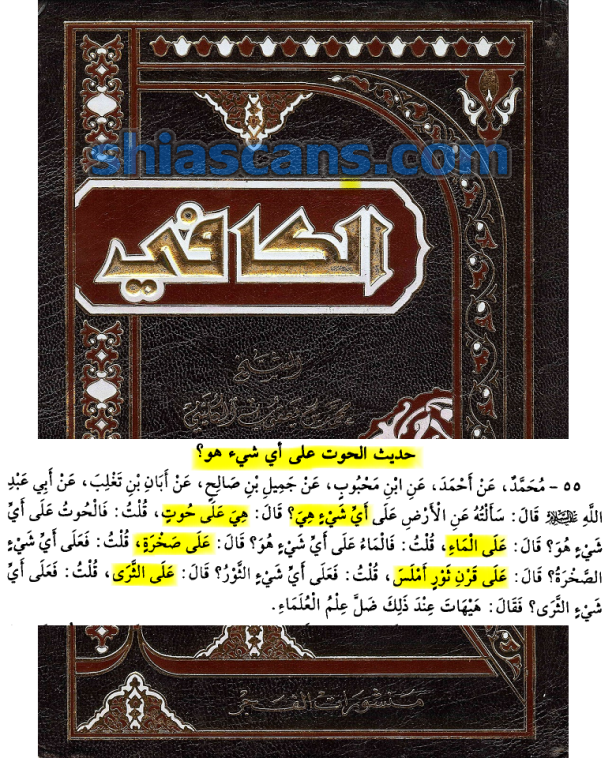 Salavat! Shia Professor Al-Sadiq (by Allah, the noble Imam Ja’far ibn Muhammad Al-Sadiq, may Allah have mercy upon him, is innocent of Shiism) must have left scientists around the world utterly gobsmacked; no wonder some Shias claim that Albert Einstein was a Twelver Shia, he was probably impressed by the narrations like the one above.

Yes, however, with a big, big difference: Sunnis have never authenticated such nonsense i.e. attributed it to Allah, his Messenger and his Ahl Al-Bayt! In fact, scholars have classed this (the narration of the earth being on a whale) as from Isra’iliyat sources (sources from Judeo-Christian traditions) which have not been confirmed or proven as authentic at all. Ibn Kathir for example in his Al-Bidayah wal-Nihaya¸ Volume 1 – Pg 15 rejected this myth. Ibn Al-Qayyim said ‘Fabricated’ in Al-Manar Al-Munif pg.67 and the list of Sunni scholars (including modern Salafi ones like Shaykh Al-Albani) who deemed this nonsense as a fabrication is far too long to be listed here; point is it is the Shia sect only, with their ‘Shaykh Al-Islam’ and ‘great Muhaddith’ Al-Majlisi who have not just put this narration in their most authentic book of hadith, but on top of it have authenticated it too, attributed it to a so called ‘infallible’ Imam.

Note: As explained on the Arabic version of Islamqa.info there are similar narrations attributed to the Salaf, such as Ibn ‘Abbas, however, this does not constitute a problem for the Ahl Al-Sunnah as neither Ibn ‘Abbas nor any other Sahabi (let alone Tabi’i) is considered an infallible (yes, that means that Salaf could have narrated Khurafat, they were not infallible, and their mistakes are rejected). However, in the Shia religion the words of Al-Sadiq are the words of Allah himself (through Rasulullah) i.e. it constitutes a dilemma for them, the Ahl Al-Sunnah have rejected all statements with regards to this superstition as neither the book of Allah nor his Messenger (peace be upon him) have ever informed us about such myth.

The origin of this nonsense – The pagan Bahamut myth

Imam Ja’far Al-Sadiq was born in Madinah, brought up in Madinah and passed away in Madinah. The most notorious liars (Shias from Kufa) according to Sunni hadith science are top narrators according to Shia standards, these Kufan/Mesopotamian residing heretics, in the lands of Mesopotamia (ancient Iraq) – that was also heavily influenced by Magi (Majoosi) Persian folklore – have attributed many kufriyat (heresies) and Khurafat (superstitions) to the Imams of Ahl Al-Bayt, particularly to Imam AL-Sadiq, including the the pagan Bahamut myth.  While the Bahamut myth is not natively Mesopotamian, it’s not far-fetched to believe that it might have roots in Mesopotamian mythology. The myths of Babylon, Assyria and Sumer were the most massively influential forces in the ancient Middle East and pre-Islamic Arab people frequently worshiped Mesopotamian gods alongside their own, so it’s not out of the question that the myth of Bahamut might have been influenced by those religious ideas.

As a matter of fact, Mesopotamian mythology is full of gigantic and dangerous sea monsters, beginning with Tiamat herself, and their focus on the ocean as the primordial source of all most gigantic and unfathomable things might have played a role in the ancient formation of the idea of Bahamut.

Bahamut isa vast, primordial fish, a mythical figure in pre-Islamic Arabia. Like many other pre-Islamic mythological features, Bahamut predates the introduction of Islam, but due to the largely oral nature of the religion at that time most of our information on the greatest of all fishes actually comes to us through Post-Islamic sources, which in early times sometimes incorporated the creature into Islamic cosmology as well. It is described in the twelfth-century Arab geographical work Kharîdat al-‘Ajâ’ib wa farîdat al-gharâib as a fish so enormous that it takes part in supporting the universe, which is organised in a series of escalating layers; the universe is supported on the shoulders of an angel, who stands upon a giant ruby, which is set upon the back of the giant bull Kujuta or Al-Rayyan of four thousand eyes, which stands on Bahamut, the massive fish (and if you want to go all the way down, Bahamut’s ocean is sometimes above twin abysses of air and fire, beneath which lurks the massive serpent Falaq at the bottom of the universe, where it does not swallow all of creation only because it fears Allah’s wrath).

The pagan Bahamut myth has been attributed to Imam Al-Sadiq (), by liars in Kufa (who narrated the entire Shia religion and attributed it to Al-Sadiq and other Imams of Ahl Al-Bayt) and authenticated by Safavid Arch-heretics such as Al-Majlisi.

Next time Shias pull out ‘weird’ narrations from Sunni books (like monkeys stoning monkeys, certainly not an impossibility, and more importantly not even a hadith of the Prophet, rather an observation of a fallible narrator) they should think twice and thrice or 12 times … for no sect attributed to Islam has ever fabricated nonsense like the Earth-Whale-Water-Rock-Smooth-Horn-Ground theory …

On a fun note

You can send us your every own drawn/made ‘Earth On Whale’ theory picture with the condition of it being based on the Shia narration, something like this: 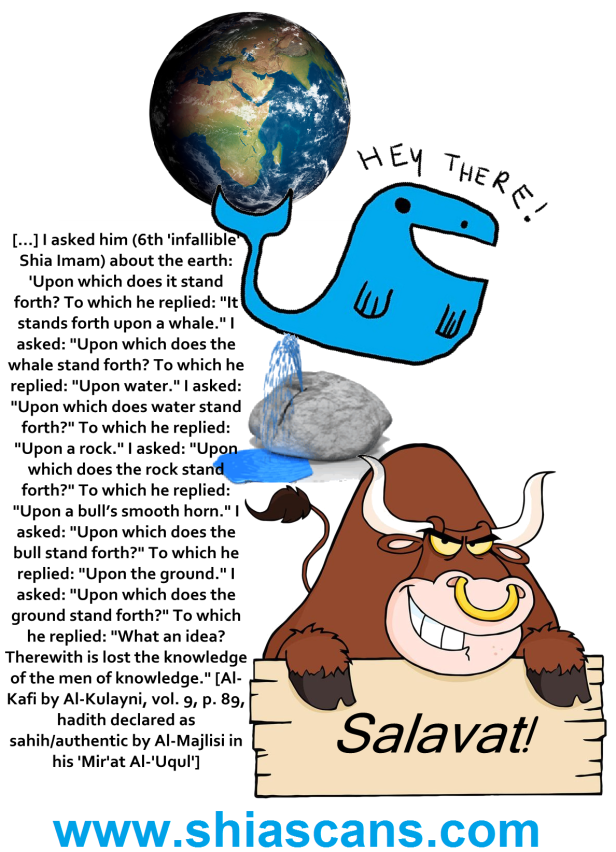 The best shots will be posted right here, In sha Allah. Email us at: shiascans AT gmail dot com