Muslims are known for their focus  in worship on God/Allah the creator alone, especially in the month of Ramadan. On this month, everything is about Allah subhanahu wa ta’ala and his glorious bookk that is constantly recited, especially on the night Al- Qadr (Laylatul-Qadr).

As one can imagine, it is the complete opposite in the Shia religion; of course the focus is not on Allah alone, but rather on the Imams, even in Ramadan, even in the month of Ramadan.

In the Shia religion there are a bunch of so called recommended A’mal (deeds) that one is supposed to perform especially on the awaited possible night of Al-Qadr. Absolutely bizarre and blatantly fabricated rituals all attributed to the Prophet’s family (علیهم السلام), amongst these rituals are:

‘Shab-e-Zarbat’ (the night of the attack) is yet another innovated day dedicated to mourning (in Ramadan!) by the Shia. It is is the 19th of Ramadan where ‘Ali ibn Abi Talib (may Allah be pleased with him) was struck by the sword (just like ‘Omar ibn Al-Khattab at the hands of the Persian coward Abu Lu’lu’ah Al-Majoosi) of Abdul-Rahman ibn Muljam (ironically a former Shia of ‘Ali who fought at his side, some sources claim that he was of Persian descent just like Abu Lu’lu’ah!).

An imaginary portrait of ‘Ali ibn Abi Talib’s assassination with his cursed assassin and murderer Abdul-Rahman ibn Muljam lurking in the back. Notice how his face is covered, yet Shias always object how Abu Lu’Lu’ah the Majoosi (Zoroastrian, according to the Shia a holy saint and Shiite!) could enter the Prophet’s mosque and stab ‘Omar ibn Al-Khattab like a coward from behind. Well, here is the answer, he could have hidden his identity by covering his face just like Ibn Muljam … 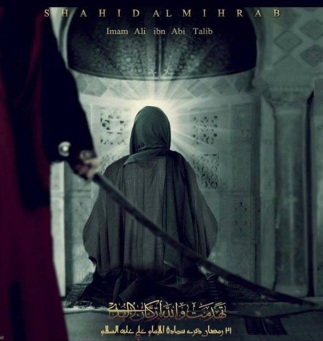 Another imaginary portrait of ‘Ali’s (may Allah be pleased with him) martyrdom. Notice how they describe ‘Ali (rightfully) as the martyr of the mihrab (prayer niche in the mosque), well, ‘Omar (may Allah be pleased with him) was assassinated (by a Persian Majoosi) in a similar fashion, in the dark fajr time, leading the Sahabah and Ahl Al-Bayt in prayer, only to be stabbed by a coward from behind who – unlike Ibn Muljim – stabbed a dozen other Muslims and finally committed suicide.

The Shias remember ‘Ali’s martyrdom on that day (19th Ramadan) with innovated rituals that have never been sanctified in Islam and never taught (let alone practiced of course …) by the Prophet (peace and blessings be upon him) and are thus rejected innovations (bida’) that have no place in Islam.

Mafatih Al-Jinan (‘Keys to Heavens)’) by ‘Abbas Al-Qommi (1344/1925). The infamous Shia book of supplication called ‘Mafatih Al-Jinan’ was published in Mashhad for the first time. It contains some of the richest and most reliable duas (supplications) and verses from the vast Shia literature and its collection (authenticity of scripts) is reliable & its compilation has been highly approved by Shia clerics throughout the last century.

Chapter: A’mal (practices) for the 19th night (of Ramadan)

Second: Repeat the following invocation one hundred times: O Allah! Curse the killers of the Commander of the Believers (‘Ali).

Now there is no doubt that the murderer of ‘Ali (a coward just like Abu Lu’lu’ah Al-Majoosi, both killed the respected caliphs of their times by stabbing them from behind while they i.e. ‘Omar and ‘Ali were praying …) is a cursed and wretched individual, however, the religion of Islam was completed with the Prophet (صل الله عليه وعلى آله وسلم), before the advent of the martyrdom of ‘Ali hence ‘Ali’s martrydom can never be a ritual part of Islam, let alone in Ramadan where the focus is on the worship of the creator only and not (yet another) wailing night!

2. Joggling the Qur’an on ones head whilst invoking all Shia saints/Imams!

Chapter: A’mal (practices) for the nights of Qadr

Fourfth: Take a copy of the Qur’an, place it on your head and say:

After this repeat 10 times each (call upon ‘infallibles’):

Is this the Sunnah of Rasulullah (peace and blessings be upon him)? Did he ever taught such obviously fabricated rituals? What he (peace and blessings be upon him) did not practice (religious ritual) and approved is not Sunnah, as simple as that; it is bid’ah, even if it is done out of genuine love for the Commander of the Faithful ‘Ali ibn Abi Talib.

As a matter of fact Shia propagandists know very well that this innovated practice can’t even be proven from Shia texts (let alone Sunni), hence you see them making lame excuses why such innovations are justified (yet at the same time they attack prayers like Tarawih!):

The plain truth is that although Shias claim to follow twelve Imams as in these twelve Imams understood the Sunnah the best and simply narrated it, yet in reality they believe that the Imams are musharri‘in (legislation and law makers besides Allah), this is why they see no problem in accepting all sorts of fabricated narrations and rituals attributed to the Imams of the Ahl Al-Bayt that were never practiced by the Prophet (peace and blessings be upon him) himself.

3. Grave/Shrine pilgrimage even in Ramadan!

Yes, even in the holy month of Ramadan, the month of Allah, the month of the book of Allah, even on this holy month the Shia clergy have managed to fool and ultimately drag their gullible followers into visiting graves and shrines where literally everything and everyone except Allah is remembered:

Chapter: A’mal (practices) for the nights of Qadr

Note: The recommendation of visiting tombs and shrines in the blessed month of Ramadan is not restricted to the Nights of Qadr, on almost every day of Ramadan Shia text push the gullible Shia to visit tombs/shrines, especially Al-Hussein’s (the grave of the Messenger of Allah is barely mentioned!)

You may ask: Are there more ridicously and obviously fabricated rituals attributed to the Ahl Al-Bayt?

Of there are, for the sake of saving the time of all of us we will mention some here:

In fact, 1000 prayer units in Ramadan are recommended for every Shia, here a list of how it should be prayed, notice how they restrict themselves to the shortest Surahs (and the nonsensical numerous repitation of them, which in the Sunnah is restricted to three for specific Surahs), barely reading any long Surah, reminds one of modern day Shias and their ‘Ayatollahs’ who can’t even recite a Fatihah with correct Tajwid …

This day I have perfected for you your religion and completed My favor upon you and have approved for you Islam as religion. {Al-Maeda Verse No:3}

No shrine pilgrimage, no matter who is buried in it (even if it’s the Messenger’s grandson), and no martyrdom (even if it is the Prophet’s cousin) that came into existence decades (!) after Islam has been completed and perfected can suddenly become an essential part of Islam, during the month of Ramadan! This is nothing but a mocking of the religion of Allah that has misguided millions under the pretext of remembering and loving the Prophet’s Household (peace be upon them).

Allah is the One Whose Help is Sought and may the peace and blessings of Allah be upon our Messenger, his progeny, wives and companions, Amin.