Siavash is a prince in the Shahnameh, a legendary Persian prince from the earliest days of the Persian Empire. He was a son of Kay Kavoos, then Shah of Iran, and due to the treason of his stepmother, Soodabeh (with whom he refused to have a relation and betray his father), exiled himself to Turan where he was killed innocently by order of The Turanian king Afrasiab. He was later avenged by his son Kai Khosrau. He is a symbol of innocence in Persian Literature.

The Iranian Buyids (Zaydis with Rafidi tendencies) and then later the anti-Sunni Safavid Twelver Rafidis (who massacred Sunni Persians en masse) propagated anti-Islamic, self-flagellation and mourning rituals in the name of the Household of the Prophet  (peace be upon him).

Consecutive Iranian-Shia dynasties, particularly the Safavids, Qajars, and today the Khomeinists, have been misusing the tragedy of Karbala and the martyrdom of Husayn ibn ‘Ali (may Allah be pleased with him) and turned it into an annual carnivalistic self-flagellation ceremony, effectively reviving pre-Islamic Majoosi-Persian myths and customs under a thin guise of Islam (only the names changed, instead of Siavash, Husayn is mourned in the same Zoroastrian fashion that is strongly condemned in Islam).

Public mourning, wailing, and self-flagellation for Hussein ibn Ali were strongly advocated by the Safavid rulers with the help of palace scholars such as mulla Muhammad Baqir Majlisi (a vicious anti-Sunni cleric who is revered in Shi’ism and by its clergy and followers to this very day). Excessive mourning rituals were unknown to the early Muslim community of the Prophet (peace be upon him), in fact even the pre-Islamic (Jahili) polytheistic Arabs were not known for it, except for their womenfolk (which makes the likes of Majlisi followers of Arab Jahili women not followers of the Ahl al-Bayt. However, mourning processions, the veneration of kings, and eulogies for them were all known in pre-Islamic Persia and hence revived by the Safavids. The tragedy of Siavash and its aftermath is narrated in several Medieval Persian texts. In Tarikh-e Bukhara, an early tenth-century historical account, we encounter a detailed depiction of an early Iranian mourning ceremony, where the author records the communal custom of remembering the untimely death of the young innocent mythical hero, Siavash

According to the text “the people of Bukhara [ancient Persian city in current-day Uzbekistan) perform/have amazing hymns/songs pertaining to the killing of Siavash and minstrels call these hymns/songs, kin-e Siavash(Avenging Siavash). Husayn Ibn Ali is a replacement of Siavash, the Majoos have changed their names but have preserved their pagan rituals all in the name of Islam in order to distort the image of Islam and to destroy it from within with Majoosi elements.

This heretical mourning procession for al-Hussein Ibn Ali and the tradition of self-laceration was promoted by the Safavids and is practiced to this very day all around the Shia world, thanks to heretical innovators like Mullah Baqir Majlisi who misused the love and passion of the Shiites have for the blessed Household of the Prophet (peace be upon him) to keep them busy with rituals that the Ahl al-Bayt would condemn and reject.

Husayn ibn Ali is a replacement for Siavash, the Shia masses, especially the non-Iranians, have been fooled for decades. May Allah guide them away from the superstitions of the Majoos that are disguised as ‘Hussayni rituals’. 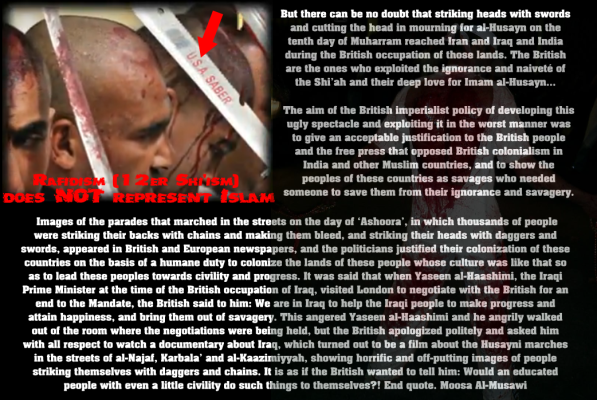 I finally leave you with a book recommendation:

The Iranian origin of Ashura

Order your copy <here> and support the brother.

This is an academic study into the origins of the Ashura commemoration which millions of Shias participate in around the world. This book answers the questions about its historical origins by studying the archaeological and literary remains of the ancient pre-Islamic Iranian culture and their mourning rituals.

The author also exposes how Shia scholarship has hidden the sunnah of fasting during Ashura from the Shia masses by hiding the true scholarly fatwas on the topic. For example, Seyyid Ali Khoei the teacher of Sistani believes that fasting on Ashura is sunnah, yet in the books that are attributed to him and spread to the Shia masses, it says it’s haram!

Amir Tabatabaie is an independent Muslim researcher coming from an Iranian Shia background. He used to be a follower of the Twelver 12er brand of Shiism until he studied the Quran and the authentic biography of Prophet Muhammad (ﷺ).